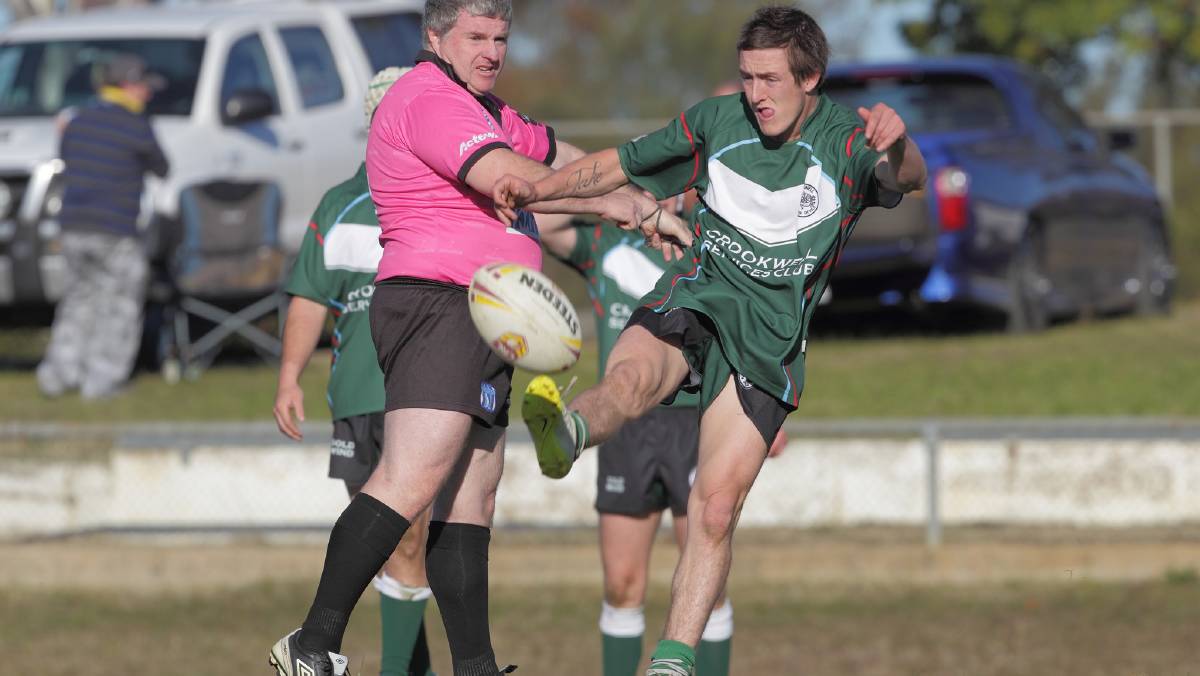 Charlie McGeechan, Hooker for the George Tooke side. Photo supplied by Susan Meli.

The Devils sent their George Tooke side to Harden last weekend and the damage was done to the scoreline early in the first half.

Harden came out too strong for the younger Devils side putting 38 points on the board before the halftime hooter.

Adding insult to injury the Devils lost a front rower Darnell Rowells in the first tackle of the game with a broken nose.

The Devils improved immensely for the second half but it was a long way to come back but they held their own against the more experienced Harden side.

The Devil’s try scorers were Danny Knight and Jamie Boothman with the players player being awarded this week to Dallas McDonald.

The Under 18 Devils versed Bungendore at Addison Oval in Canberra last weekend.

Round three and with only four teams in the division two under 18s comp the teams are going to play each other a bit over the season and Crookwell were up against Bungendore again for the second time in three weeks.

The team was down a few players with the rampaging Jack Panne out for three to four weeks with a knee injury.

Bungendore started off very strong scoring the first try within five minutes but missing the conversion.

They played well for another five minutes and then the young Crookwell boys started to get their passes together, backing each other up, scoring at regular intervals to half time with the score reaching 32-4.

After the second half the boys continued their great form running out winners 56 to 16.

The player’s player was Isaac Gibbs who in a reshuffle of the back line by master coach Chris Chudleigh was placed on the wing, and to Gibbs’ true character he took it on as a challenge and made some great runs into the thick of the pack, never taking a backwards step.

His one on one defence was great to watch making several try saving tackles.

He was reward for his effort with three tries.

Sam Picker’s goal kicking boats were on target making the 8 out of 10 conversions.

The She Devils also traveled to Harden to take on the Harden Hawkettes last weekend.

Harden scoring in the first few minutes of the game put the She Devils on the back foot for a while. The She Devils defense was tested in the first half but they managed to do some great tagging to prevent Harden running away with the game.

Sharni Unterrheiner picked up a try for the She Devils and Kayla Gann was awarded player’s player. The finals score was 14-4 to Harden.

With the team having a bye this weekend they will then travel to Yass to play the Girlpies on Saturday May 30 along with the George Tooke side.

This Sunday May 24 the under 18s are at home playing Tuggeranong Bushrangers at 1.00pm at the Memorial Oval.

The George Tooke side will follow starting at 2.30pm playing ADFA Knights Blue.

The She Devils have the bye. 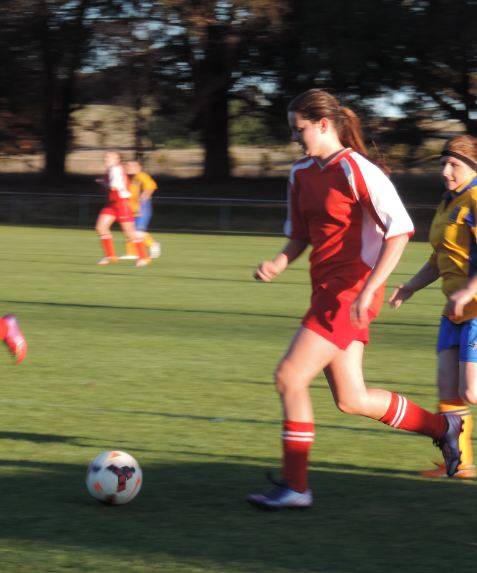 Laura O’Keefe was solid scoring one goal for the game with Lucy Thearl scoring the other two.

THE All Aged Women played at Crookwell as the feature game on Saturday against Bundanoon Rebels.

The group of young ladies have continued their fine form with the fourth win of the season.

New into an attacking position with the team is Lucy Thearl who scored two goals in her first game on the field playing as keeper the week before.

Laura O’Keefe also scored for the women’s team bringing the final score to 3-0.

The usual strong defence held out all attacking runs led by Grace Smith with her youthful partners Gemma O’Brien and Lily Penne.

Of Course, the older lady of the team, Liz Cramp was rock solid.

Goalkeeping find of the year so far is Ella Picker who handled this position naturally.

Under 14s Crookwell defeated by Trinity 4-2

Under 17s Crookwell drew with Trinity 3 all

Mens Crookwell drew with Soldiers 1 all

Crookwell Men’s Youth Team play at Crookwell on Saturday at 11am and all other senior teams play in Goulburn.

The All Aged Women play at Yerrinbool this weekend on Saturday at 3pm.

The final of the major fours was played in cold conditions on Thursday May 14.

Jacqui’s team played well as a team, with skip Jacqui able to deprive her opponents of shots they were holding.

Sue’s team struggled a little but scored five shots late in the game to put them in reach.

Jacqui’s team didn’t relinquish the lead and went on to win by just two shots.

Congratulations to all players and thanks to umpire C Picker.

No bowls played on Tuesday May 19 due to bad weather.

Birthday E Todkill on May 24.

Afternoon tea roster on May 26-28: D Ritchie, K Ritchie and A McIntosh.

A reminder to all members, street stall on Saturday May 23.

Good hockey was played on Saturday with all but one team having one nil wins.

Good luck by Rie O’Brien, unlucky for Kate who was left dumbfounded when Rie slipped the ball behind.

Sprinters played a 1 all draw with Schooies. This was a very good game. Sorry, I have the card with no best players.

This game was also very good and tight. Play began from end to end with no teams having any chances to score and both defences were on top.

After twenty minutes, Rebels moved the ball into the Golf Club circle and were awarded a penalty corner where Olivia Maher scored.

The next 15 minutes of play was end to end unable to penetrate the other’s circle.

After 50 minutes a long pass down the right by Golf Club ended with Jasmin Olive scoring a good goal. 1 - 1.

Scorer for Rebels was Olivia Maher, for Golf Club was Jasmin Olive.

Contributed by A Warren.

All forms need to filled in and returned by Saturday to Mandi.

Training for all interested B Grade players will be run at the hockey grounds every Wednesday between 4 – 5pm  subject to the weather.

Please bring your own ball (with your name on it). We hope that many of our B Grade players can take advantage of this very generous offer.

I don't know who you are. I don't know what you want. If you are looking for hockey, I can tell you I don't have hockey details. But what I do have are a very particular set of skills, skills I have acquired over a very long career. Skills that make me a nightmare for people like you who don't want to know when soccer is on. If you let me tell you now, that'll be the end of it. I will not look for you, I will not pursue you. But if you don't, I will look for you, I will find you, and I will tell you when soccer is on.

A GRADE (Sponsored by Davies Newsagency)

B GRADE (Sponsored by Goulburn Produce and D & R Tyres)

D GRADE (Sponsored by I Just Fit Blinds and Awnings)

All parents, if unavailable please arrange your replacement.

All parents, if unavailable please arrange your replacement.

Soccer Committee Meeting: Next Monday 25 May 7pm at the Top Pub

Good luck to all teams in this new winter squash competition.

One spot still available for player.

One spot still available for reserve.

The Crookwell Junior Green Devils travelled to Goulburn on Saturday to take on the Broncos.

In a fast and entertaining game that included some barnstorming runs from Billy and Jack Speer, Nate Kemp, Nathan Rowles and Mathew Bale.

A highlight of the game though, was the Devils defence with all players contributing to the tackle count.

George Lee, George Skelly and Jay Knight combining to make 40 tackles between them with Skell making a massive 17 tackles.

In a close game, that came down to the final whistle, the Broncos just snuck home five tries to four. Tommy Cole was awarded player of the match for his clever little runs and his cover tackles on some kids that were much bigger than him.

The U7s take on the stallions at home this Saturday @ 1:40pm. Contributed by - Andy Knight.

U9s won- score to be confirmed - This team is needing a manager.

Round five is set to be a blockbuster weekend of footy for the Junior teams.

With the U16s at home under lights, their game kicks off @ 7pm.

The mini devils having a run too. So if you have an interested 3-5yr old.

Bring them around to the Memorial Oval on Sunday.

Full canteen facilities available on the day. Hope to you at some of these games on our big weekend of footy, supporting our local kids.

Keep your eye out for the sign on the roundabout and up the mighty Devils!

Discuss "Around the sporting fields"

Discuss "Around the sporting fields"