After reading on Trove about the various lectures that have been conducted in Gunning from at least the 1880s, I wondered if there was still an appetite for such lofty pursuits in the Gunning of the 2010s? And after a surprising response via the Gunning Community Facebook group, it seems there is!

During my recent long service leave, I began reading a number of books on Stoicism, and I have embarked on a cover-to-cover reading of the Great Books. As a political scientist, I have always believed that a liberal education is essential to a healthy liberal democracy. Of late, the Great Books have fallen out of favour in our education system, and so too has our faith in our political system.

I have always been inspired by Robert Hutchins' (of the University of Chicago and the person responsible for the Great Books education system which is seeing a revival in the United States) idea of The Great Conversation.

In the Gunning Library today, librarian Peta Luck made an important observation: Libraries are essential to democracy. And she is right.

So when fifteen people attended the two workshops (on 7 and 10 October) to discuss Practising Stoic Philosophy, it was pleasing to discover that there is so much more to love about Gunning.

Many people are interested in the history of their family, their family's military history, or their house, but philosophy? At least three percent of Gunning's population provided the empirical evidence: an emphatic "yes"! 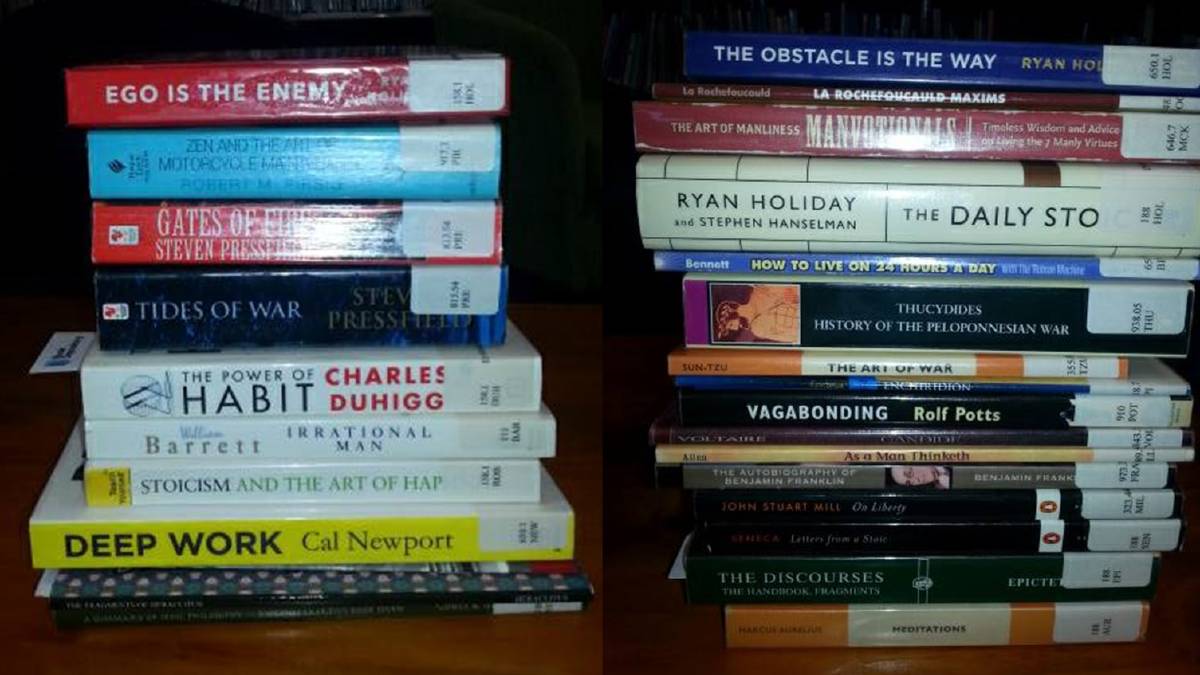 In the lecture, I drew upon some of the ideas I have developed in teaching leadership. My favourite textbook for leadership is by James Clawson, of the University of Virginia, who defines leadership as "the ability to manage energy first in yourself and then in others". Stoic philosophy begins its focus with the individual, too (as does a liberal education), so there are many parallels.

Next, we looked at a brief history of Stoicism. I spoke about the idea of education as a transformational experience, where we learn and grow as we are exposed to new ideas, new ways of thinking, and the assumptions and beliefs we have inherited are challenged by our own reasoning.

If, of course, we choose to do so. An age-old problem for many people is that, even when the evidence is indisputable, individuals will cling to their prior assumptions and beliefs.

Heraclitus (circa 500BCE), taken from Fragments, noticed that this was a common problem for many (Confucius said, “When you see that [students] do something wrong, give them sincere and friendly advice, which may guide them to the right way; if they refuse to accept your advice, then give it up”). Further, Socrates (circa 399BCE), suggested that "the unexamined life is not worth living" (which appeared in Plato's Apology, but attributed to Socrates, which is disputed, of course). The point is, it is up to the individual. But how does one know?

The Stoics suggested that happiness could be found in the virtuous life. I introduced two approaches to understanding "virtue". Aristotle (circa 350BCE), in his Nicomachean Ethics, outlined the idea of finding the "Golden Mean" in twelve virtues.

But a more practical way to assess one's "virtues" is to consider Benjamin Franklin's Autobiography, where he outlines his thirteen virtues and his 13 Week Program for living a virtuous life. This entails keeping a schedule and a diary and self-assessing on a daily basis. More about "journaling" later.

I gave this a bash over two 13-week periods and it is quite effective, at least in identifying one's weaknesses in this regard.

Then to a brief history of Stoicism. Stoicism was founded by Zeno of Citium. Only second-hand sources, written years after the event, particularly the work by Diogenes Laertius, The Lives and Opinions of Eminent Philosophers, remain. But the focus of the session was largely on the three Roman Stoics: Seneca, Epictetus, and Marcus Aurelius.

The "simple" philosophy that underpins Stoicism is this (from Epictetus):

Imagine if you were unable to change your first "opinion" or "impression" or "perception" of what the pictures above represent? There are two possible ways to comprehend what you see. For Marcus Aurelius, "external things are not the problem. It's your assessment of them. Which you can erase right now". Imagine if you were stuck with your first opinion of everything? As they say, "first impressions last".

So Stoics see things in terms of good, bad, or indifferent. Only our actions (which are the only things we can really control) can be good or bad. Everything else is beyond our control. Our response can be good or bad, but one should be "indifferent" to the external event. Not uncaring, not unsympathetic, simply indifferent.

Marcus Aurelius journaled every morning to prepare for the day ahead. The book Meditations is what survives as his journal. It was never meant to be a book for public viewing as far as we know.

Seneca journaled every evening to reflect on the lessons of the day.

For Ryan Holiday, the young powerhouse who has recently published The Obstacle is the Way, Ego is the Enemy, and The Daily Stoic, journaling is Stoicism.

The daily process is most important – self-mastery happens over time, not in an instant. Think of how today you probably jumped in the car, backed out of the driveway and drove off to work. All without a single thought about how to drive or what to do - it all happened naturally.

Then think back to the first time you sat behind the wheel of a car. It wasn't simple, it was a long process of learning, step by step, until eventually it became second nature. Journaling facilitates the same process, but it is an intellectual process, rather than physical.

We then looked at a number of Stoic techniques. Rather than go over these in detail, have a look at Ryan Holiday's website The Daily Stoic, where you will find all sorts of techniques and resources.

So the next time someone cuts you off in traffic, control your impressions. It is not good or bad, it is external and beyond your control. So choose to be indifferent. If you get angry and stew about it all day, the Stoics say you choose to do so. Choose different.

I wish to thank Peta and Maree at the Gunning Library for making the seminars possible, Vanessa Mackay for rounding up the troops, the Gunning community for being so interested and supportive, and the talented Leslie Bush who is nothing less than superhuman in her ability to make things happen. The lessons I have learnt will be drawn upon next year when I teach a new subject at the University of Canberra entitled Political Leadership, where I will cover the Stoics as part of political leadership in Ancient Greece and Rome.

The following books on Stoicism will be available for loan from the Gunning Library in the next couple of weeks:

You can also find many classic texts online for free at archive.org. If you want a really quick read that covers the basics of Stoic philosophy, try Epictetus' Enchiridion (The Handbook).

Some of the books I had on display at the seminar are shown in the photo above. These titles are all available for purchase via The Book Depository.